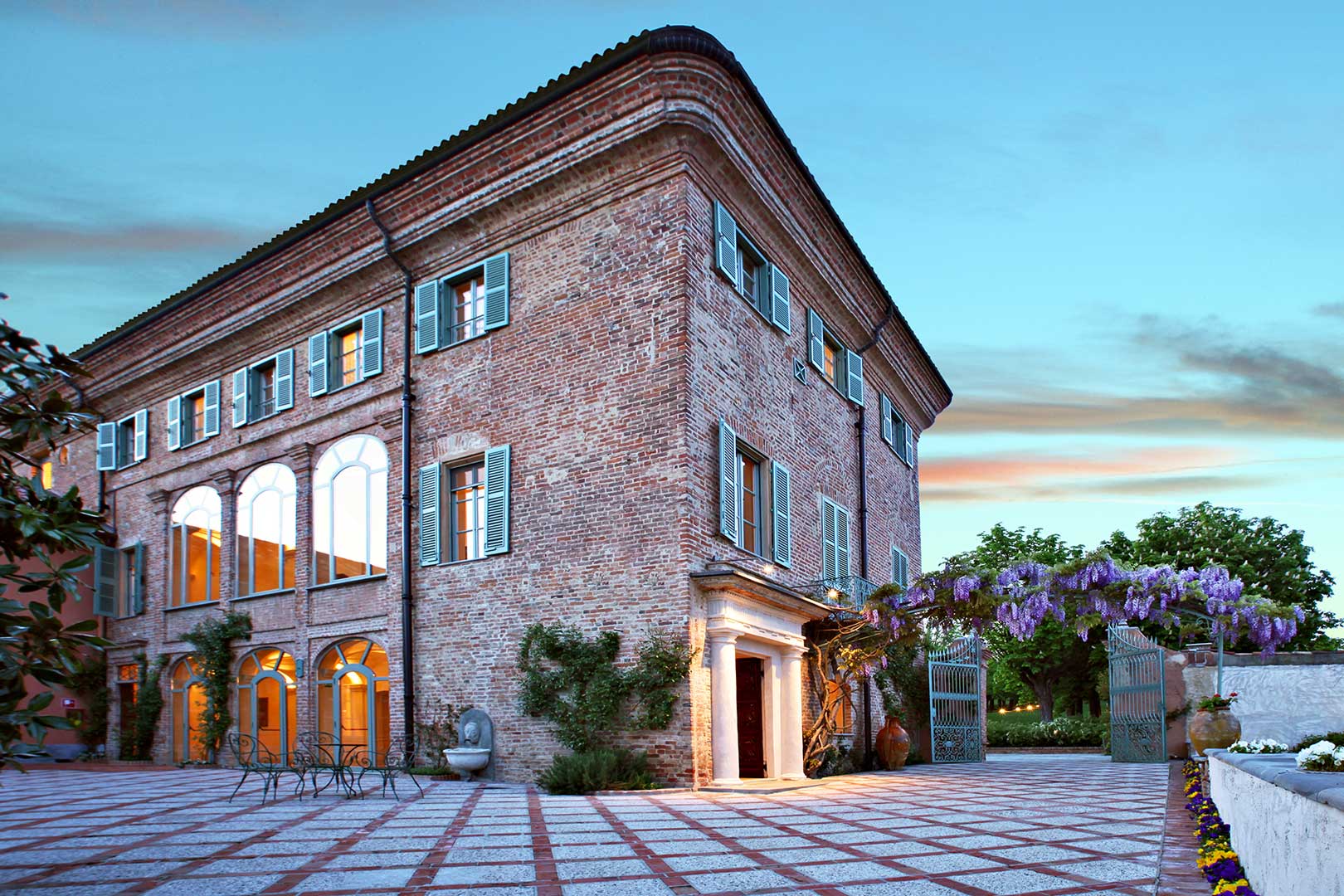 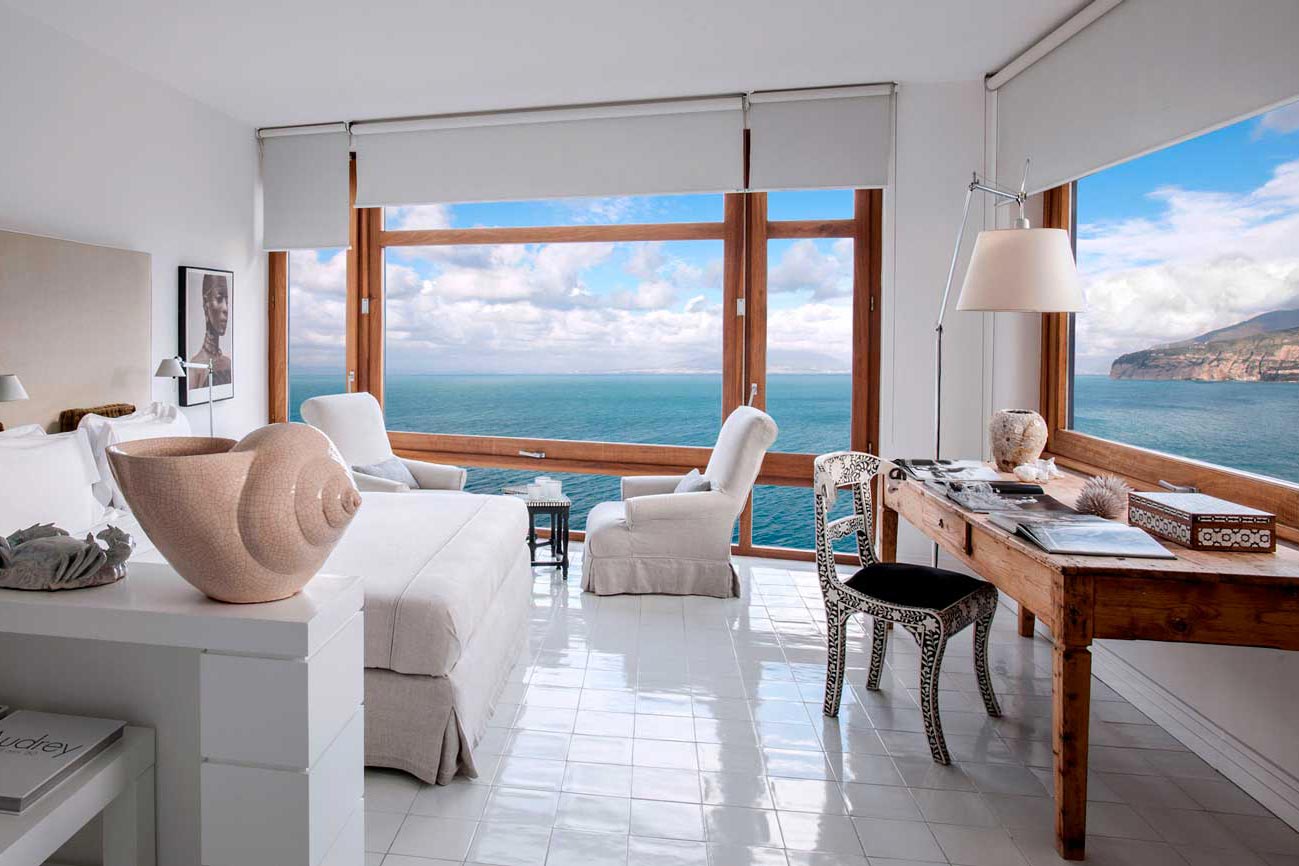 An autumn escape to Sorrento 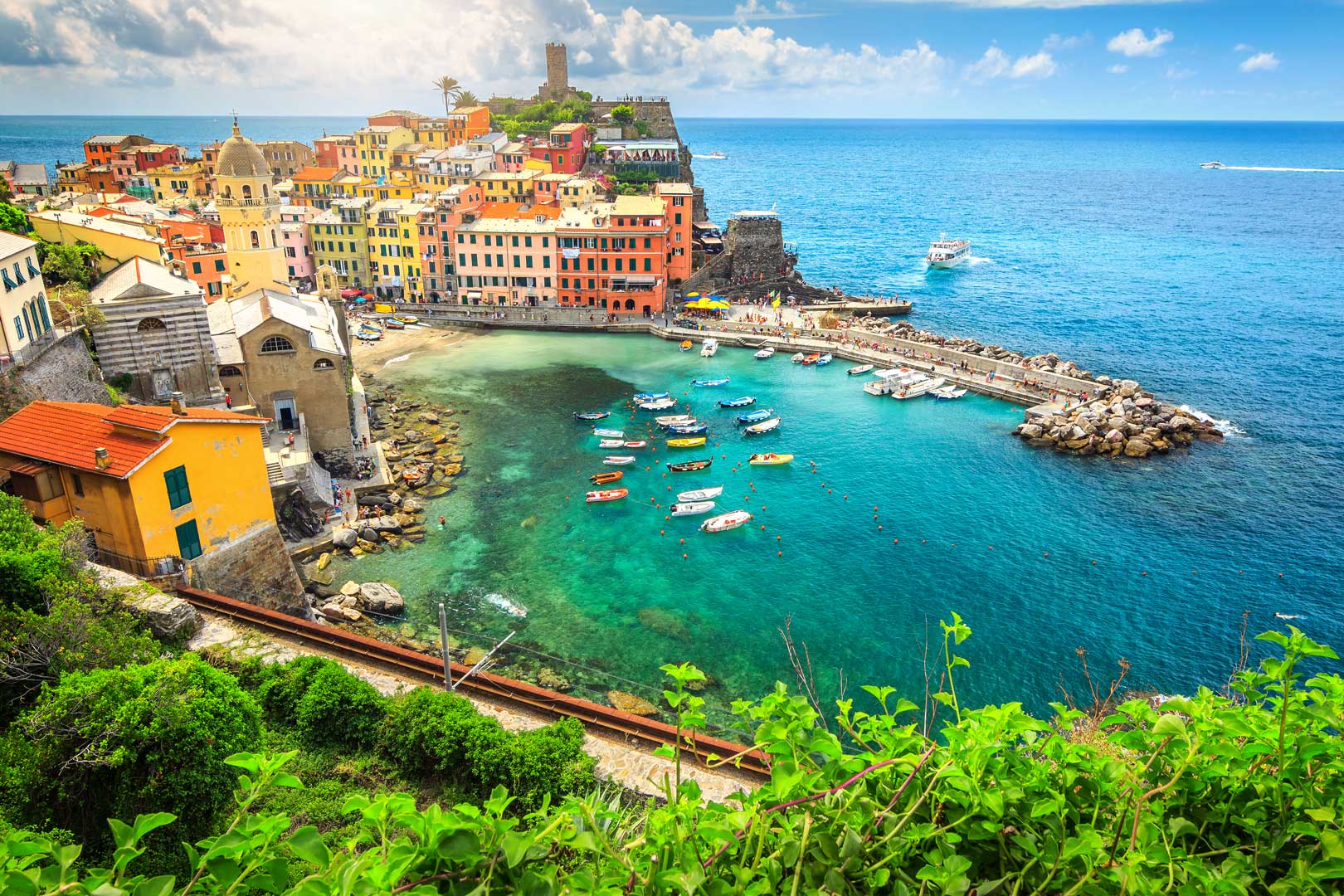 Chasing one of the most beautiful treasures of the Italian coast

Cinque Terre (The Five Lands) are one of the many treasures that the Italian coast gives us, hardly accessible, kissed and caressed by the sea, but where access to the sea is often limited and hard. So we’ve decided to help you discover views, locations, shops, restaurants, and tell you how to do it best not just in the summer!

We then added Bonassola and Portovenere to the story, one to the West of Cinque Terre and the other to the East. Here are some great reasons to visit these gems at least once in a lifetime. 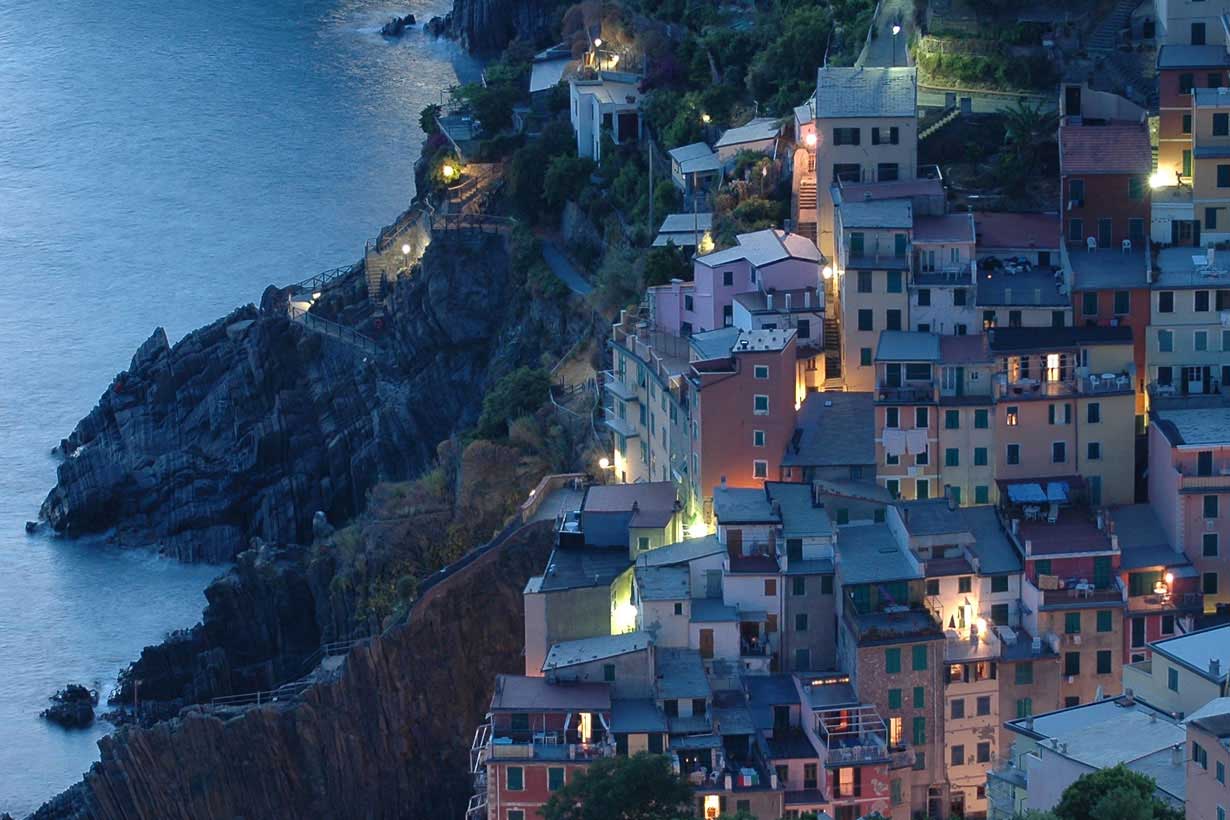 Riomaggiore is the last of the five lands in order of the anagram invented to remember them all (MOVECOMARI). In Riomaggiore your gaze is captured by the decorations made of colored nets and buoys, and it’s fascinating how time seems to have stopped (it is, in fact, less frantic compared to Vernazza and Monterosso). If you have a book to read or write you can stop by “A pie ‘de ma’“, a self-service bar that is literally a few steps from the shoreline (which means “A pie ‘de ma'” in the local dialect). It’s one of those places where smart working would go just fine, inspired by the whisper of waves and the atmosphere heated by a good glass of local wine: the “Sciacchetrà”, produced in the terraced vineyards on the surrounding hills. 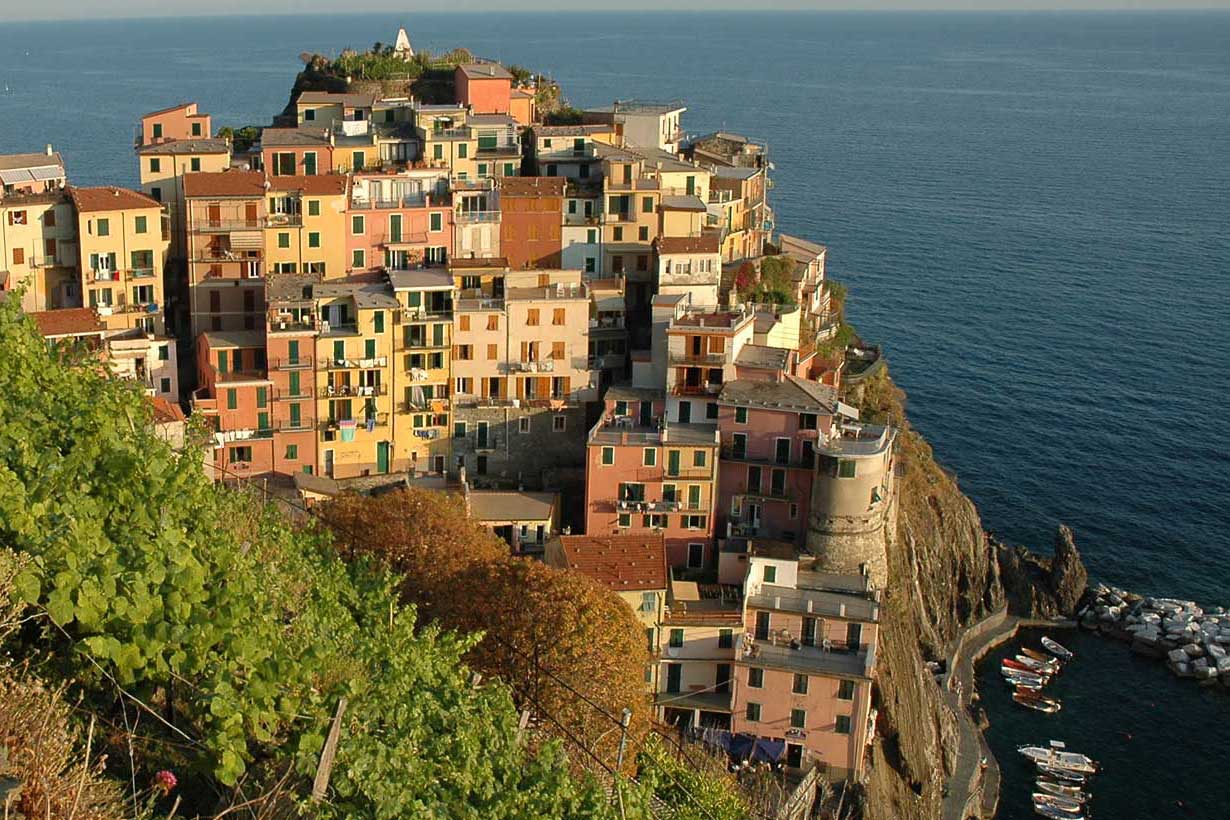 Cinque Terre can be visited all year long, mainly because the mild climate of Liguria would allow you to walk around in a sweater even in March or October on a sunny and non-windy day. However, one place in particular should be visited in December. It’s Manarola. From December 8th to the end of January, when daylight in the sky is changed by all shades of rose and orange (around 5:30 pm), on Mount Manarola more than 300 lights play out a unique nativity scene. It was built in 1976 by a retired railwayman residing in Manarola, and has also become low-energy in 2008, as the 17,000 light bulbs that illuminate it are powered by photovoltaic panels since that year. The show is truly a must see! If you arrive at Manarola at sunset in a good season you should have an aperitif at “Nessun Dorma”: cold cuts of local produce, original cocktails down to the last detail, and a breathtaking panorama. 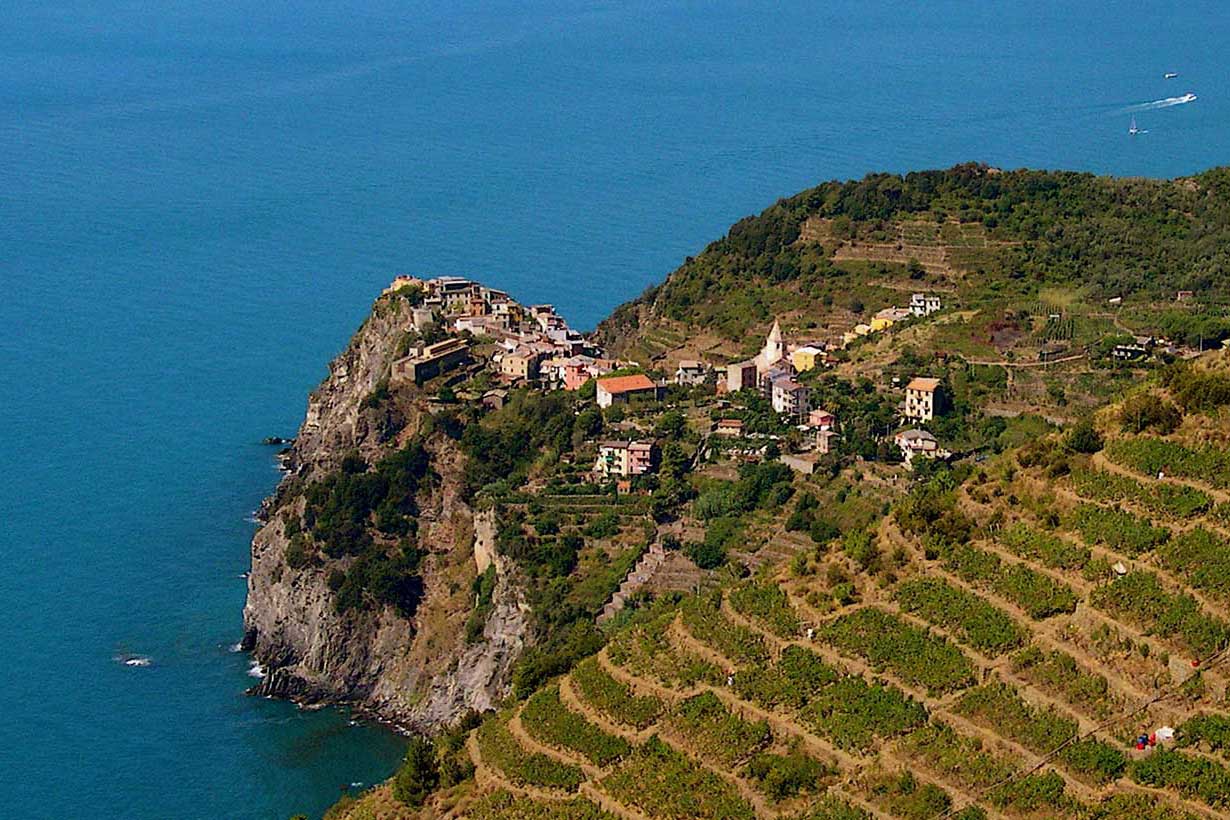 One of the five lands perched on top of the hill, Corniglia, that is best explored while walking. An intricate of vineyards, literally attached to the mountain and historic shops, selling artisanal pottery. Exciting, though a bit tiring, is the Lardarina staircase that leads from the station to the village. If you won’t volunteer to climb it, there is a less steep via della Stazione or the bus. Any option you choose, once at the top, you deserve a cool drink from the “Bar Terza Terra”. The name is a pun about its location, in the third village of the five, overlooking the sea. Very attractive is the playground near the parish. A small field that, if needed, is suitable for soccer, volleyball, basketball or anything else and is perhaps the most beautiful sports field you’ve ever seen! 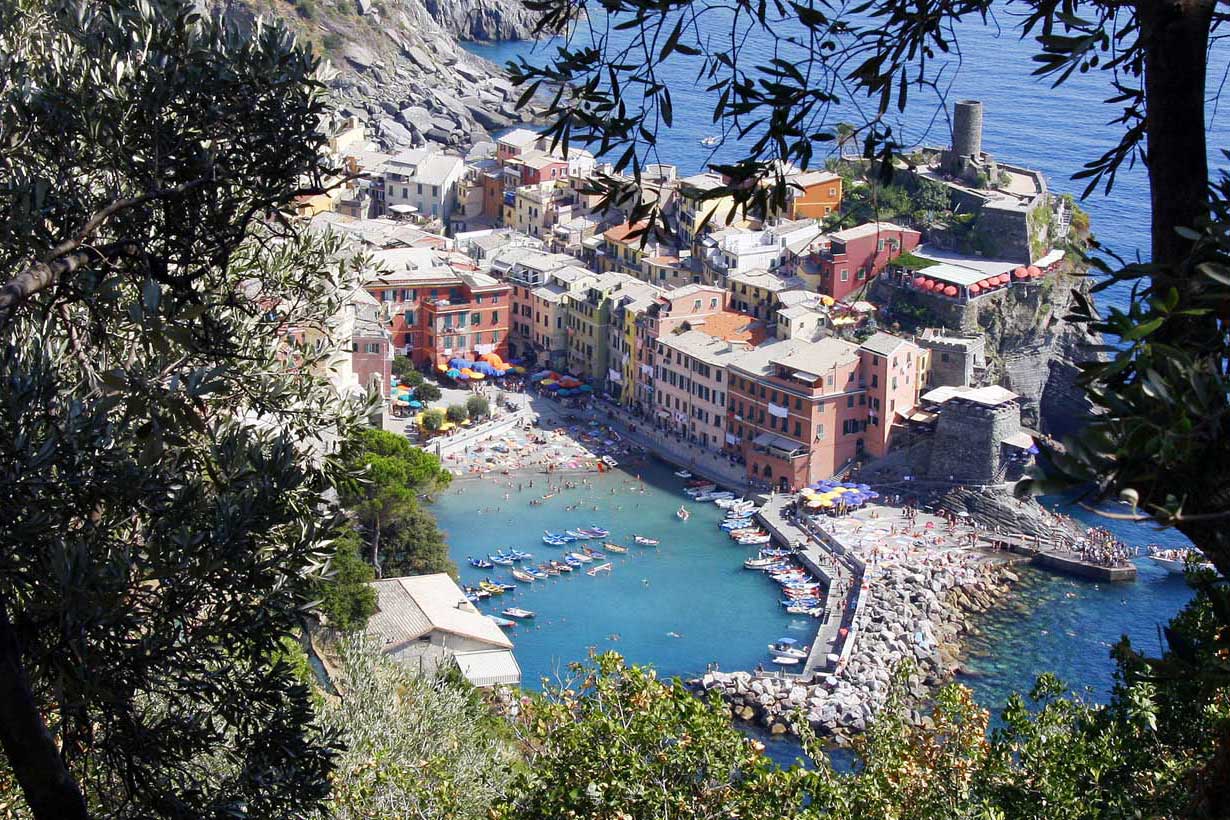 Despite the flood that literally destroyed this village (you can see the signs of the water level on its buildings), thanks to the efforts of the inhabitants and many volunteers it has regained its splendor. The square of Vernazza is very particular, as well as the tower of the building known as “Doria Castle“, dating back to the 13th century. And if you are in Vernazza for a romantic getaway, you can’t pass by the “Belforte Restaurant”, under the rock overlooking the sea. Also, we especially advise visiting the Church of Santa Margherita, right on the beach. The interior is simple, but what’s striking here is the light. The three double-arched windows of the side aisle filled with natural light that breaks in from the sea is a sight to see, especially for those passionate about photography. Always perfect, but if the sun is low on the horizon – even better.

MONTEROSSO – If there is a wedding approaching… 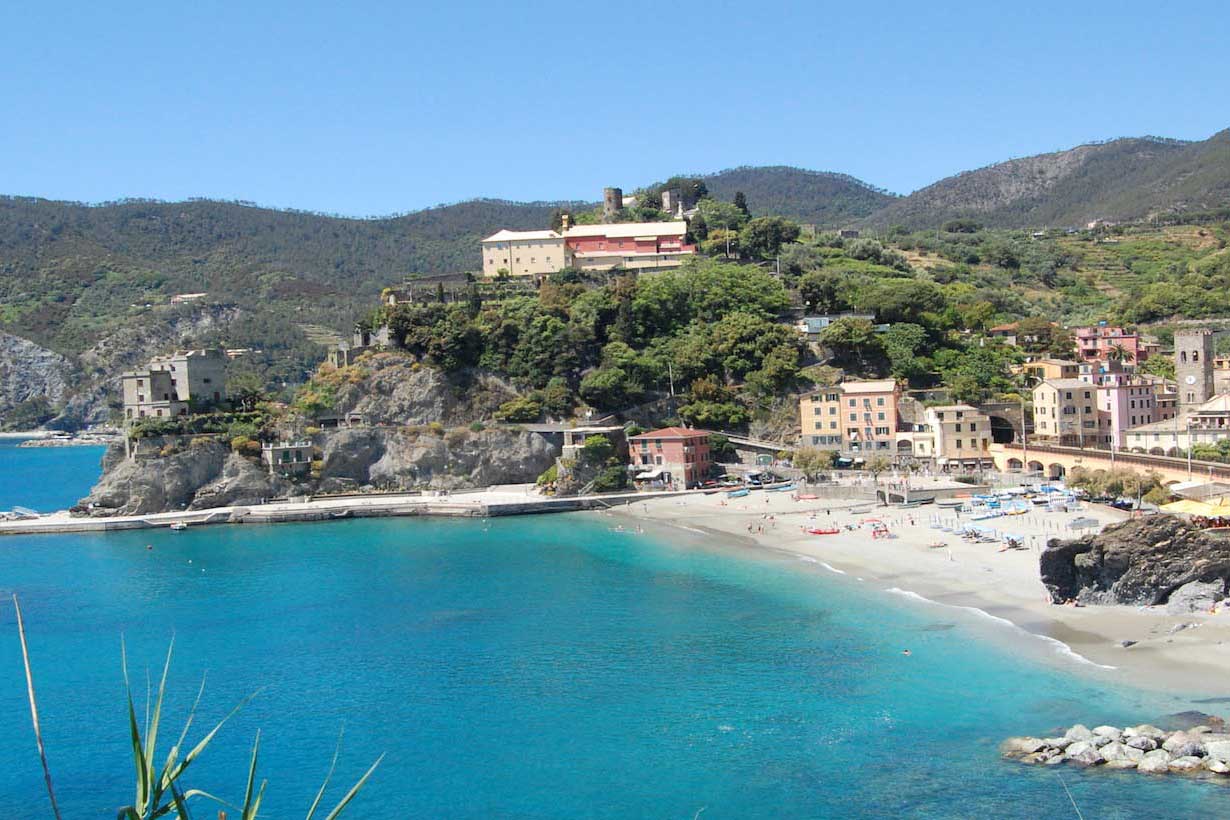 Monterosso is the only one of the five lands with a real beach that has all the necessary facilities, but if you want something different, take a walk along the path headed to the west on the sea shore. It flows into a small road that leads to a hillside with beautiful villas and houses and with a great view on the Giant of Monterosso, a statue on the sea built as a villa decoration in 1910, partly destroyed by the bombings of World War II (which destroyed the villa itself), and partly by sea storms. Inside the village you can admire “vicoli” (tiny Ligurian streets), arches, houses one upon another, decorated letterboxes… and make sure you eat a slice of the local pie: a layer of frolla with moist Pan di Spagna on top, covered by apricot jam and confectionery cream with drops of dark chocolate. Monterosso’s gem is the retreat of Saint Mary Magdalene. Three kilometers from the village up the mountain to see a splendid historical complex dating back to the 11th century and formerly inhabited by the Benedictine monks. The retreat has twelve rooms, perfect for a fairy-tale wedding. 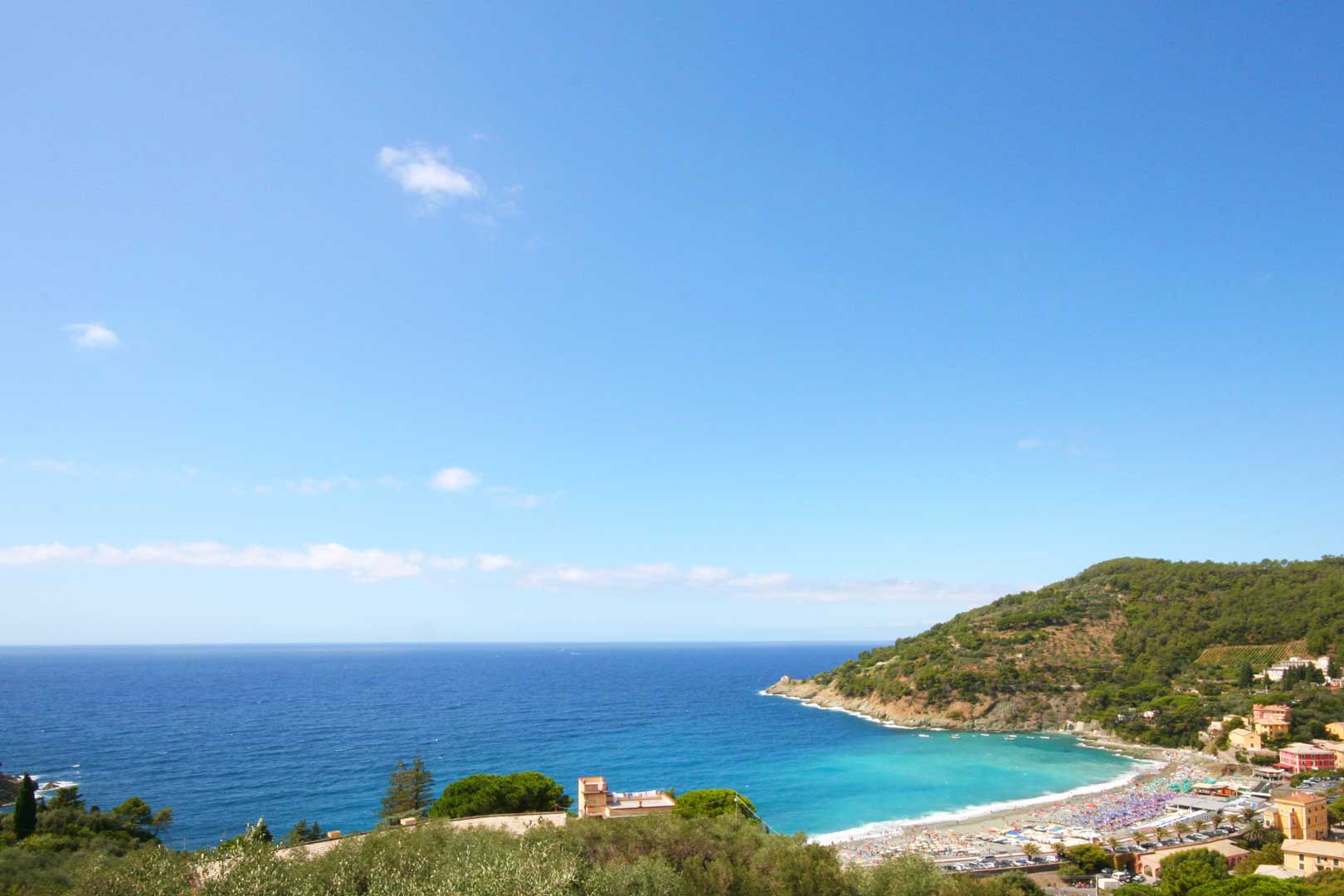 Bonassola is a small village that precedes Levanto. The ideal way to visit it is either from Levanto or from Framura, renting a bike (Pesciocan a Framura, Cicli Raso in Levanto) and riding either from Framura to Levanto or the other way around. Your path will lie through old train tunnels. In the tunnels, even in the summer, it is very humid (so take a sweater), but the way is just 6 km on a flat surface, suitable even for families with children. Tunnels don’t last all the way, once in a while changed by spectacular views and crystal clear waters.There are two good reasons to stop at Bonassola on your journey: try panissa with Stracchino at the paninoteca Pippilan, and go visit the Chapel of the Madonna della Punta. If you are experienced, go there by bike, or leave the bike in town and goby foot if you are not entirely sure. The chapel is on hilltop that is ten minutes walk from the center. The walk offers a beautiful view of Bonassola and once arrived you will feel like you are amidst the sea rather than on top of a hill.

PORTOVENERE – Events I can’t even count! 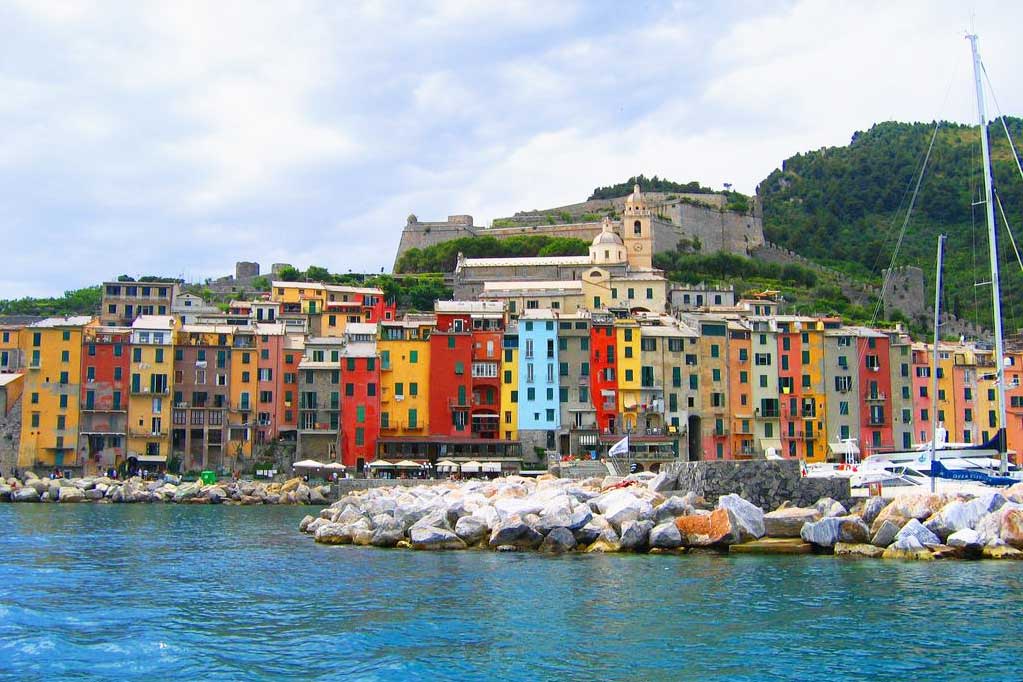 Portovenere is well-known for the San Pietro Church built in the 10th century for the village to be recognizable to those coming from the sea for its black and white stripes, just as described in Montale’s poem about Portovenere. But Portovenere is not just a view, there are so many things to do! Between April, May and September there is a busy schedule of events (from July till August there is one almost every day): fish festivals, markets, swimming competitions, theater and cinema under the stars… If you are here for two days, in the evenings you can try “Il Timone“, a small but well-groomed restaurant, with Ligurian dishes traditional or revisited in amodern style (cod, farinata, caponadaand others). In the afternoon, or for an improvised snack, “Anciùa” (anchovy in dialect) is a spot in the very center of the town. The restaurant prepares excellent snacks – mini frittelle, typical of the Magra valley, that come with sweet and salty garnishes. If you still have time to visit the Palmaria Island, please do. 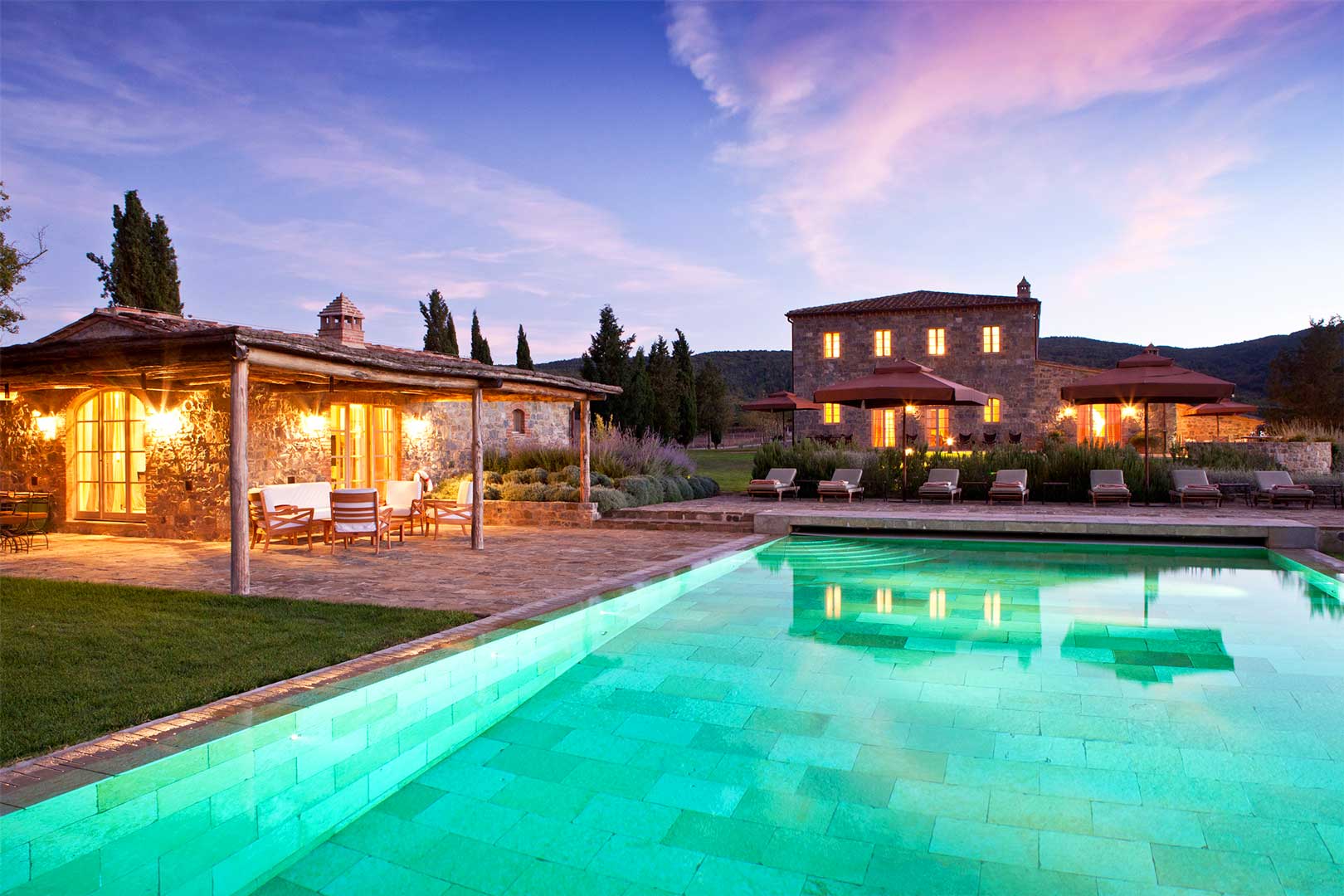 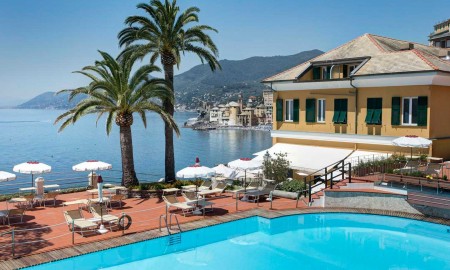 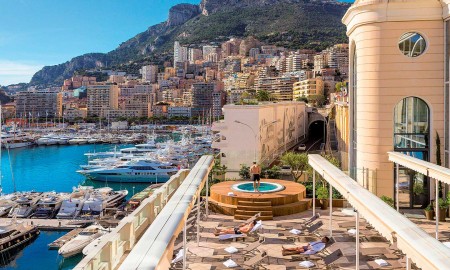 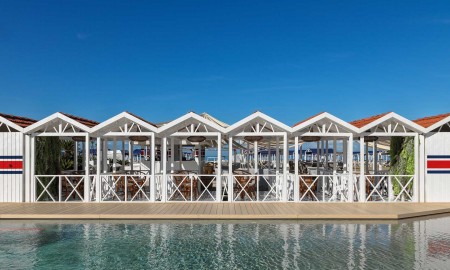 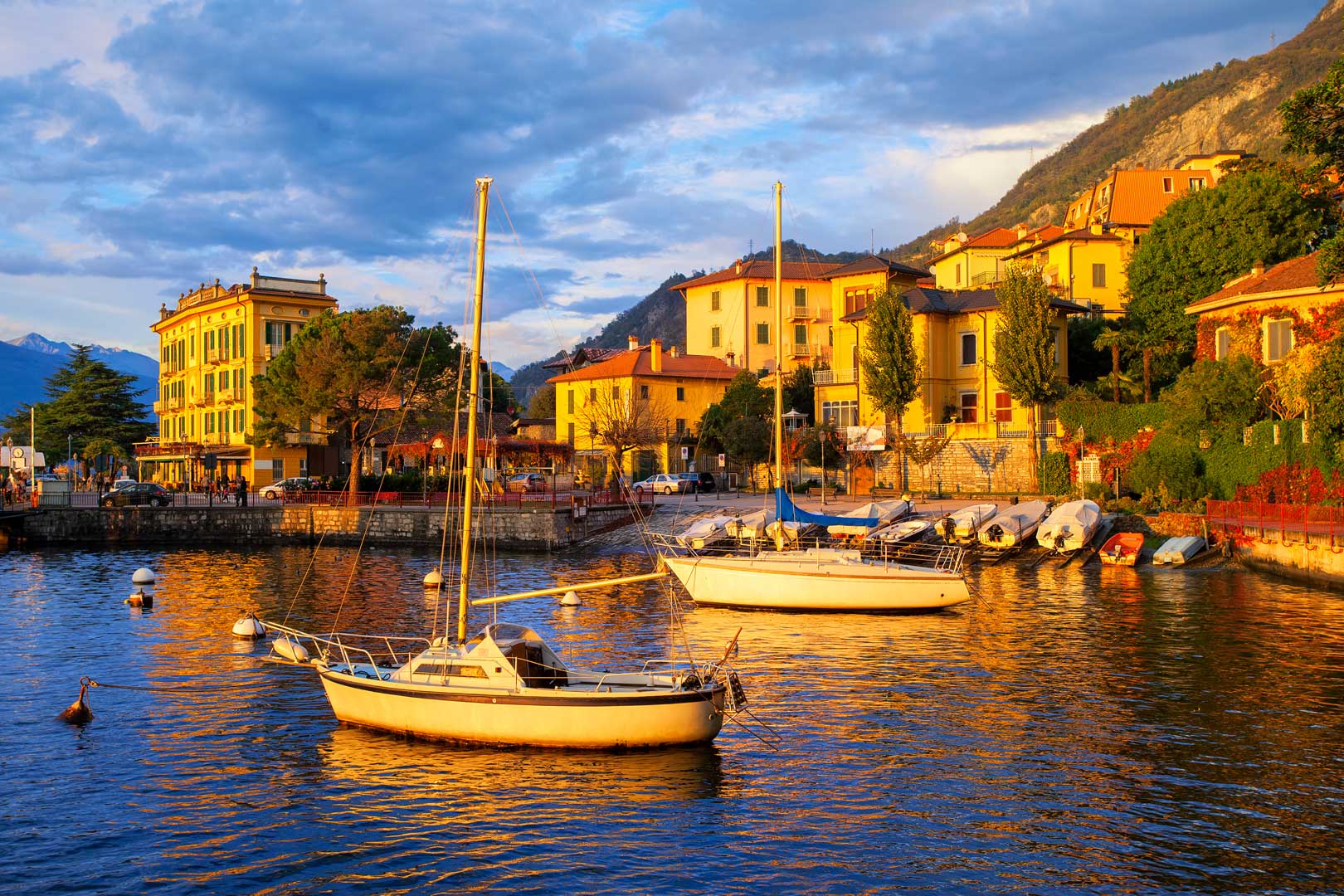