The exotic Polynesian bar that we needed in the city

It was Ernest Raymond Beaumont Gant who opened the first tiki bar in the 1930s under the Los Angeles sun, set to a backdrop of a disillusioned America that left the Prohibition behind. Don The Beachcomber (as he called himself), was the first to season his restaurant with the exoticism that he gathered from his many years of in the Caribbean, creating a unique place in Los Angeles that for the first time brought the city slicker into a totally immersive experience. The tiki mania experienced a golden age until the 1970s, yet the world still takes a great interest in this phenomenon to this day. In Milan, where you can surf the waves of a tireless social scene, the desire for infectious exoticism has (finally) made its way to the Naviglio Grande at Rita’s TIKI ROOM, a gastronomic portal straight to Hawaii. The new, one of a kind cocktail bar from the Rita crew is a true escape from the busle of everyday life. Here, you can indulge in the shade of a palm tree or on a remote island in the middle of the ocean. The location is a microcosm of colors, textures, photographs, shapes, and patterns that create a delightful whirlwind of extravagance, sweeping away the familiar, frenetic atmosphere and metropolitan architecture of Milan in an instant. To make this daydream come true, the team at Rita placed their trust in their long-time friend Matteo Oioli. Matteo was the head set and props designer for television programs such as Friends, and global events such as the 2006 Turin Olympics, 2014 Sochi Olympics, 2016 Asian Olympics, and AIMAG in 2017. Matteo perfectly understood their desire to create an authentic tiki location with a strong visual impact. He managed to take advantage of the height of the space to fill it with elements that slowly reveal themselves to Rita’s patrons, gradually displaying the finishing details in the materials. 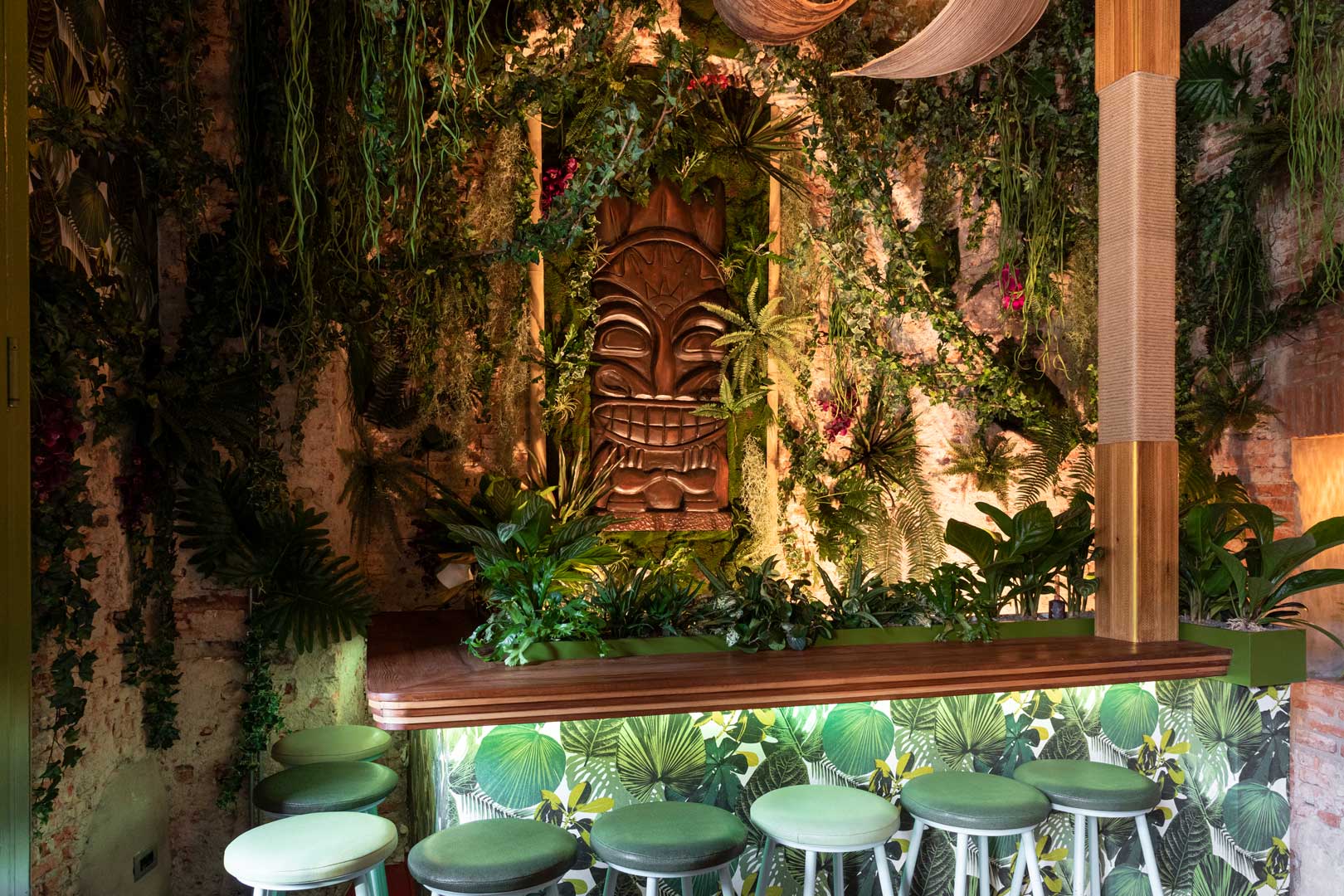 Woven coconut walls, hanging pots from the ceiling, ropes, huge bamboo chandeliers, jungle-style wallpapers, colorful wicker chairs and tables, a delightful terrace, vintage ceiling fans, hanging coconut leaves, juta lamps, a giant handmade canoe, and an infinite number of plants contribute to the perfect setting for a tropical aperitif, dinner, or after-dinner treat. It is also hard not to marvel at the 15 meters of oxidized brass counter with wooden finishing that snakes between the rooms as well as the impressively lush green corner with a tiki carved by specialist Paul Campese, who accurately reproduced the bar’s logo (originally designed by the Paperplane Factory). And if the interior design forces the eyes to endure continuous visual surprises, the bar and kitchen satisfy the other senses. The food menu at Rita’s TIKI ROOM is a breeding ground of creative offerings. About twenty dishes were created under the tutelage of Eugenio Roncoroni, chef and owner of Al Mercato Ristorante, Burger Bar, and Noodle Bar. The snacks are perfect to share to dispel pesky cravings, but the delicious main courses perflectly blend both Cantonese and Polynesian flavors. For instance, start by sharing giant fried oysters with tartar sauce, homemade lumpia (pork and vegetable spring rolls), or house fries with banana ketchup and crème fraiche. Try the spicy chicken wings with salsa ranch and then move on to the coconut curry noodles, fried platain tacos, or the noteworthy Maialino Kalua. 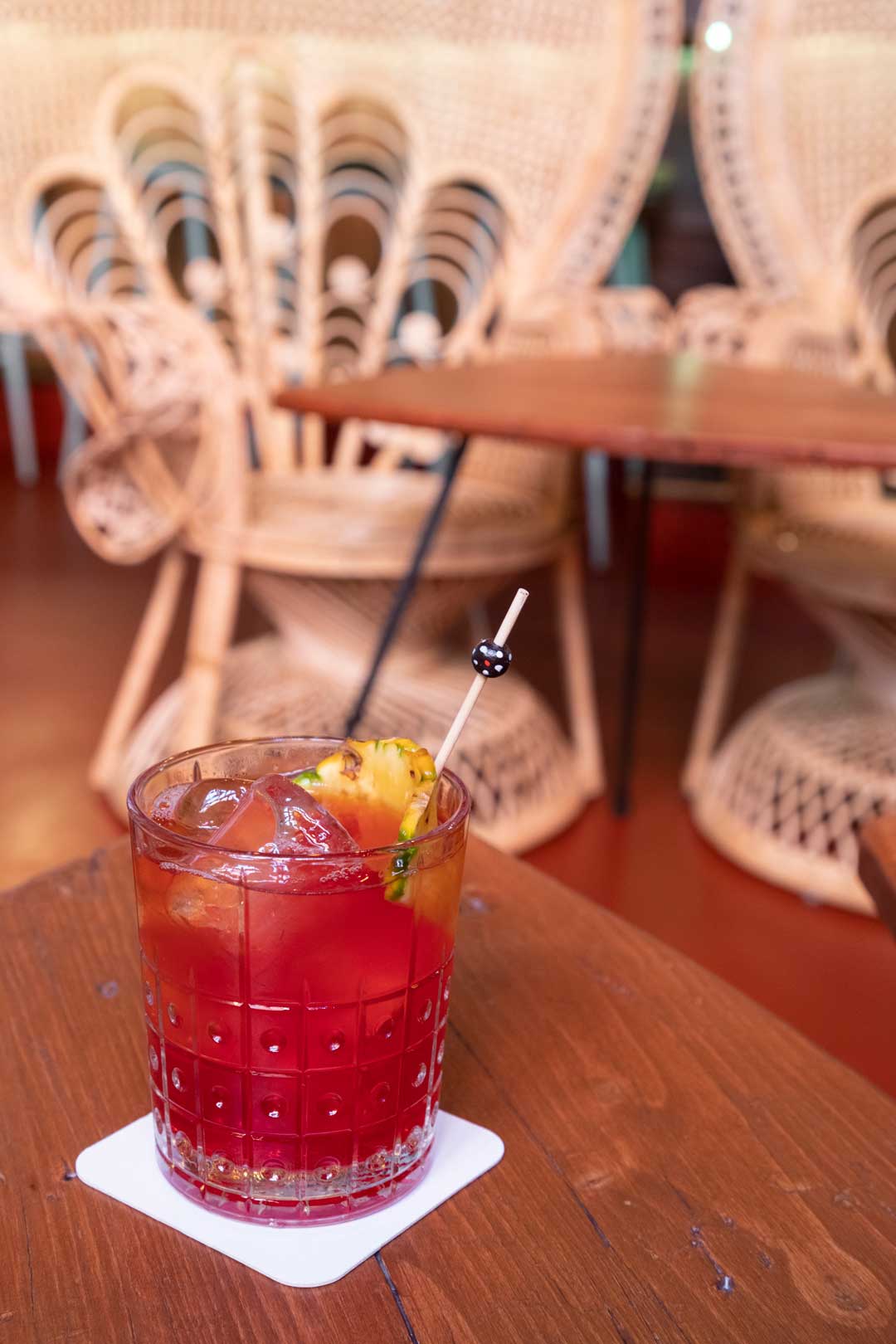 Rita’s real innovative genius is undoubtedly revealed in their Mixology through both the imitation and transformation of original cocktails by Don The Beachcomber that constitute the essence of the Tiki. Fog Cutter, Painkiller, Krakatoa, Hurricane, and Mai Tai are just some of the drinks that you can’t miss, always made with Rita’s high-quality homemade ingredients. There is also a selection of frozen drinks and Rita classics that have reflected characteristics of the tiki influence since the early 2000s. Rhum is an undeniably expert choice, classifying Rita’s as the first real rhum house in Milan, along with a small selection of classic spirits. “Stay tiki, enjoy!”: now you know where to go to for a daily dose of joy on your plate and cheer in your cup. Per leggere l'articolo in italiano, clicca qui. The MAG Cafè is truly an extended family with many brothers: Il 1930, a 1930s-style speakeasy only accessible by a special card; Backdoor 43, the smallest bar in the world; Iter, the exotic gastronomic destination in Via Fusetti; and Barba, the youngest son dedicated to a love of music [...] Per leggere l'articolo in italiano, clicca qui. To open the rank on Google Maps, click here. "Milan to drink." This is how the Amaro Ramazzotti advertisement proclaimed it in the mid-1980s. Then, that same advertising phrase became an expression that has taken the form of an indelible tattoo on Milan, heralding the beginning of a new era for [...] Per leggere l'articolo in italiano, clicca qui. When you're in front of a big cooking pot, intent on reading and measuring out the right ingredients to pour into it, something eccentric and unusual always seems to appear during the mixing. We imagine this more or less so every time Flavio Angiolillo and his crew decide to [...] If French gastronomy had a background soundtrack, it would almost certainly be called "Bistrot" and would be made up of notes of quiche lorraine, omelets, typical cheeses, foie gras and so on, set in a pentagram with a musical key - a tradition in this case. The bistros, especially the Parisians, have always been the backbone of the [...] We know well the Pavé guys: we loved them first with their bistrot in via Casati, then with their second endeavour, Break in the Crocetta area, followed by the success of Pavé Gelati and Granite. The unmistakable signature of Pavé is the combination of superlative products, cheerful and thoughtful service. The atmosphere is done in a style [...]